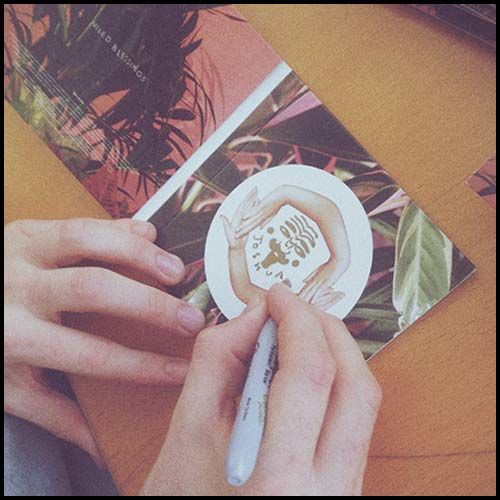 Coming out of South-London’s hub, Peckham, trio-Beaty Heart are pleased to reveal details of the debut album, Mixed Blessings, set for worldwide release on 2nd June via upcoming label Nusic Sounds and distributed by Universal’s latest setup, Caroline. Like old acquaintances Beaty Heart arrive with their debut record, Mixed Blessings, which sees them take and combine their tongue-in cheek attitude and pulsating personality to form 13 tracks of blissful psych-pop.

From the minimalistic layered swells of ‘Yadwigha’s Theme’, to the stripped piano lead ‘Muti’, to the gloriously vibrant and cacophonous ‘Seafood’ and ‘Kanute’s Comin’ Round’, Mixed Blessings is an album that is pulsating, captivating and sonically feels organic, or in the bands terms, “woody”. Recorded during the later end of 2013, with esteemed producer Dave Eringa, Mixed Blessings sees the band fulfil their early potential and deliver a record that shows their continuous journey; developing their tropical enfused pop with a more exposed structured sound, whilst retaining their strong percussive backbone and off-kilter left-field ethos.

With influences taken from The Beach Boys, Olivia Tremor Control, Lee Scratch Perry and pop music from around the world, Beaty Heart’s music and lyrical wit follows themes of escapism. Something that stems from the experiences, along with their friends, they have encountered during everyday life in London since leaving college. Along with the difficulty that obstructs the transitional phase into adulthood; exploring the feeling of attempting to hold onto our youth and the elements of life we associate with being carefree and explorative. Or as the band say, “By us making this weird fruity album, we have the best fun ever writing and playing these songs. When we do, everything else that is real and that sucks about life is shoved to the side for a little while. Hopefully it will serve the same purpose for other people too.”